How to explore Doubravnik via satellite

Recently I have seen Doubravnik on the globe from the universe. I have seen also the places of catastrophe in USA. These images are rather simply accessible by the free program Word Wind. This program has been released by NASA as an open source program. World Wind is an application written in the language C# that allows the users to view many different global imagery sources in one place and projects that imager onto a globe that he can rotate and zoom in to see greater detail. More information you can find on the following site:

You can read there the download information as well as how to install this system on you computer. On the Internet, there is also a guide which helps you to start using this program. 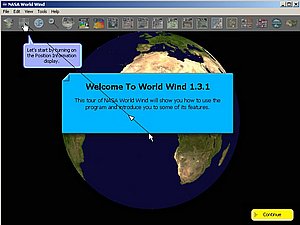 Many users all over the word are exploring earth and teaching themselves geography by this wonderful tool. At its simplest version you can think of this program as a desk globe (it is a globe represented on your computer), however World Wind is not a simple desk globe, because it is provided wit many functions. There exists a large community of users distributed all over the world and you can take part in activities developed by these people. Exploring the word by the program World Wind gives the possibilities to visit and see and place on the Earth. Searching for Doubravnik I was lucky enough to find the village Husle not far from our Svratka valley. It is quite possible because the program World Wind allows any user to zoom from outer space into any place on Earth. You simply start with globe and using your mouse you can reach the desired destination. World Wind leverages satellite imagery and elevation data to allow users to experience Earth terrain in visually rich 3D, just as if they were really there. Virtually visit anyplace in the world.

Unlike your desk globe World Wind can display thousands of place names all over the world, from Country capitals to villages in sparsely populated regions. You can see country borders, and in some cases intracountry borders such as US states.

World Wind can also be expanded to include additional imagery and data. There have already been created a number of additional tools which are denominated add-ons (= dodatky).

World Wind offers the several built-in features and tools; most important of these tools are:

On the following site:

you can look for all the in formations you could be in the need of.

Being this text very simple to comprehend, I did not provide any vocabulary this time.